The Many Ways of Corrosion 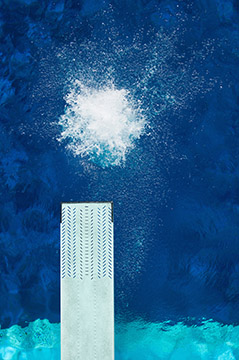 Corrosion remains a pervasive problem in the industry. However, understanding how this happens can help pool and spa professionals to diagnose and fix the issues while on the site.

Last month, we had a very basic overview of the physics and chemistry involved in the corrosion process. In this second installment of a three part series on corrosion, we discuss the various forms of corrosion and the mechanism of each.

Once you understand how it happens — the chemistry and physics behind it, and the different types — then you can make some intelligent choices.

Here’s a look at the different types of corrosion we find in pool and spa environments:

This is just like it sounds — the material removal is nearly the same over the entire surface.

For this type of corrosion to occur, the electrolyte must have access to the entire surface, and the material must be uniform in composition. The most common example of uniform corrosion is atmospheric attack on steel or iron parts.

In the pool and spa industry, we might see uniform corrosion on the black iron pipe used for gas or propane valves, or on the top of heater tubs, where rainwater or sprinkler water can collect. It also can be found on metal components with powder coating, such as the boxes or panels used to store control systems and electrical connections. The paint can become damaged or otherwise flake off, inviting a uniform attack.

When two dissimilar metals come in electrical contact and in contact with the same electrolyte, this type of corrosion can occur.

Each of the metals will have a fundamental electrical potential, or specific voltage. When they come in contact this way, the more positively charged metal will become the anode, surrender electrons and be consumed. An example could be a brass screw in a stainless steel light fixture.

Anytime you have two different metals in contact, you run this risk.

But this dynamic also provides a mitigation technique — sacrificial anodes, which are frequently used in pool and spa heaters. Here, aluminum, magnesium or zinc is electrically connected to the parts you want to protect. It will corrode first, protecting the pool equipment.

This technique also can be found on chain-link fencing, where nearly every fastener and sign post is zinc plated. That coating provides a sacrificial barrier in that it corrodes and protects the substrate.

So while galvanic corrosion can be a bad thing, you can use that physics to your advantage. It can be a weapon or a shield.

This can occur when two closely fitting parts create a crevice and trap a small amount of electrolyte in such a manner that it cannot equalize with the rest of the electrolyte. This is called a “restrictive geometry,” which prevents dissolved oxygen from equalizing.

Oxygen is consumed cathodically in the crevice, creating a concentration difference. The metal in the restricted geometry then becomes anodic and loses electrons.

It should be noted that the source of the crevice or restrictive geometry can be both from the assembly of close-fitting parts, and overlap weld or chemical deposits in a heat exchanger.

This is the result of a localized non-uniform corrosion attack on a corrosion-resistant surface.

Many materials, such as stainless steel, titanium and, in some situations, copper, have a durable oxide layer, meant to protect the metal surface from corrosion attack. The protective film is not perfect, so weak spots can exist. Once the protective layer is defeated, the corrosion current is focused on very small areas on the surface, where the protective layer was broken. This results in small but relatively deep pits.

Once the pits develop, the same dynamic occurs as we see in a crevice corrosion event: The oxygen concentration in the area decays relative to the rest of the electrolyte, further anodically polarizing the bottom of the pit. The bottom of the pit becomes more and more acidic. Further, the strongly positive charge pulls local chloride ions into the pit, further destabilizing the protective film. This process continues to accelerate the local corrosion rate, often resulting in a pin hole through the entire thickness of the material.

For stainless steel, the main cause of pitting corrosion is chlorides in the water. It is important to not allow salt concentrations to become excessive. Overuse of sanitizer also can result in pitting corrosion.

In SCC, the combined effects of stress and pitting corrosion result in the material cracking. This is sometimes observed as a failure of formed stainless steel light shells and niches.

This happens when something, usually heat, causes alloying elements to separate.

This is a selective corrosion attack in which the more vulnerable elements are dissolved, leaving the remaining, more resistant elements in a porous structure.

The dezincification of yellow brass is a common example. Brass is an alloy of copper and zinc. The latter is very active and is selectively attacked, leaving behind a porous copper structure. Dezincification is a risk whenever brass is exposed to chlorinated water. It is common in pool equipment.

This is the combined effects of corrosion and either fluid motion or connected parts moving relative to each other. That relative motion grinds off the protective layer, while fluid motion can wash it away. This then increases the corrosion rate. Examples of this could be excessive water velocity in a tube or pipe, abrasives in the water or a loose bolted joint.

Another example of erosion corrosion is cavitation, a fancy term for localized boiling. We all know water boils at 212 degrees F, but technically this is only true at atmospheric pressure. If the local pressure is reduced by the movement of the water through a flow restriction, the boiling temperature will drop. It is possible to boil water at lower temperatures in restricted flow channels. Once the pressure recovers, the vapor bubbles collapse and release significant energy that will damage the local surface and increase the corrosion rate.

Here, stray voltage is usually caused by a failure to bond or outside sources. The part that is polarized more positive will corrode. This is common if professionals have not bonded an item as defined in the National Electrical Code. This is the case almost every time I see lights corroding in a pool.

Now that you have a basic understanding of corrosion physics and mechanisms, the next installment will address corrosion-mitigation techniques.